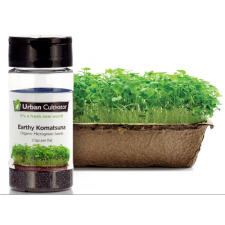 Our seeds are non-GMO, rigorously tested to ensure that they exceed sanitation and contamination standards, and the varieties we offer are carefully and specifically selected for Urban Cultivator appliances.

These tender, rich leaves are often referred to mustard spinach due to komatsuna’s distinct spicy flavor. Komatsuna is most popular in Asian cuisines, grown almost exclusively in Japan, Taiwan, and Korea. Komatsuna can be consumed at any stage, drawing comparisons to spinach in its early stages, and to cabbage as the green matures. In Asia, it is often stir-fried, pickled, boiled, or used in soups or salads.

The green is also known for its incredible nutritional properties. Chock full of vitamin C and carotene—far more than spinach in terms of content—and believed to have cancer-fighting properties, komatsuna is a great thing to incorporate to your diet.